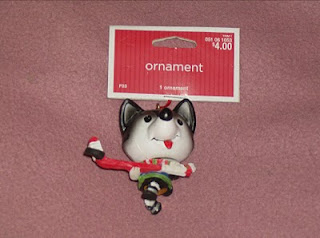 In honor of the Christmas season, I am giving away a Siberian husky playing hockey Christmas ornament. In my opinion, it is the cutest ornament ever made, and you know I'm not just saying that because I'm a husky.

To win this prize, come to my blog and post a comment from now until December 5, 2010. For each comment posted, an entry will be entered into a drawing. I, Demon Flash Bandit, will draw the winner on December 6. This contest is open to everyone in the United States and Canada; and of course, postage will be free. This is my way of thanking everyone for reading my blog, and to wish my readers a merry Christmas. A photo of the ornament is included on today's blog.

It is time to start putting up the Christmas tree which, in my opinion, is the time of year that is on the same scale as birthdays. Any day when this dog gets gifts and treats has my approval. I have been looking through catalogs to see what to ask Santa Paws to bring me for Christmas. Some of the humans went to Black Friday sales yesterday, but not my humans. They stayed home and ordered stuff online. This dog approves since I don't like it when the humans go out and leave me at home. I have heard that a lot of humans go out shopping and many of them aren't having a good time. I don't think us dogs will ever understand why the humans put up with some of the things they put up with, but then we have to remember that they are humans and humans aren't logical. Be sure and start looking through catalogs and watch some television commercials so you will know what to request from Santa Paws when he asks you what you want.

Demon Flash Bandit (Preparing a List)
Posted by Donna at 10:13 AM