I am taking my brother William to court for slander.  I overheard him telling other humans that Dr Demon Flash Bandit prescribes frequent baths!  This dog thinks baths are inhumane, and lead to injuries like falling in the bathtub.  This dog does not now nor will I ever prescribe a bath.  I'm a good Dr. Not a quack.  I plan to sue for a truck load of Dingo bones.

My Recent Run of Good Luck!

This dog has been having a string of good luck for the past couple of days.  It all started when I found a box of my brother, William's medicine.  I was able to get some suckers and tootsie pops.  Yesterday I found pure gold-- red Swedish Fish candies.  I love them.  I found a nice sized bag of them and I know the humans wanted me to have them because of my hurt paw!  It is feeling much better.  I'm so lucky to have such thoughtful humans!  They were in a box that was on top of a shelf.  I had to do a bit of climbing, but I found it.  They wanted me to get some exercise.  As I said, they are always watching out for this dog!  Today I found a box of Mike and Ikes root beer float flavor.  As you may have guessed, this dog is going to be buying lottery tickets.  Normally, I would not recommend purchasing them.  However, I can't argue with my good luck.  Besides, I'm sure humom won't mind buying.them for me.  I think I could potentially win as much as $25. for dingo bones.

As usual, I am receiving many inquiries about the war in Afghanistan or wherever our troops are at the moment. I don't really see the need in humans fighting other humans when that fire power could be better used to kill birds!  Once I am Preident, the war of bird aggression will begin.  Personally, I am okay with squirrels, but if dogs of the terrier persuasion
want to chase squirrels, I am okay with it.

I plan to put General Fuzzybutt the cat in charge of the artillery.  Those cats show no mercy.  Cats hate birds as much as I do.  It is a battlefield promotion for Fuzzybutt.

My Goals as President

I have been silent on the subject of the young human who went into a church and killed some people of African American descent.  Evidently, some of the humans think it was done by a Confederate flag that ran amok amd went on a killing spree.  The media takes a.kid who dropped out of school, used drugs, was more than likely insane, and got a gun legally which.he should not have been able to do.  Instead of gettng to the root of the problems, as usual, the govt.'s answer is to blame an inanimate object.  At least 10 years ago, a man with a gun walked into a Ford plant in Wixom, Michigan and killed an employee.  My dad worked in the plant at the time.  Why?  Because he was in love with one of the women who worked there that he met in a local bar.  Yes, the man was nuts. I try to be concerned with other people's feelings, but I do wonder where it going to end.  Since I am running for President, I thought I should let my readers know what I find offensive because.I will push to enact legislation against these things.

1. I find birds living on my planet to be highly offensive.  I want all birds shot on sight so that they can't take over this wonderful planet.

2.  I would outlaw all sale ads for.kibble.  I find those ads are stupid.  Dogs don't want to eat.kibble.  They want to eat wbat their humans are eating!

4,  Baths and grooming need to be outlawed.  I don't like either of them.

5.  Vets-not military vets, but vets that treat animals.  However, if a military vet is also a pet dr. , I would suggest.that he is part of some "Inception" type movie plot and can't be trusted.

As you can see, I plan to be a paws on president who gets things done.

"The best laid plans of dogs and men often go awry"  which is based on a line from a poem by Robert Burns.  I discovered the truth of that sentiment earlier today.  I had been preparing a rawhide bone for my consumption for a long time.  I have been systematically "marinating my bone in mud, dirt, and other interesting smells until it was.finally at just the proper eating level.   Your bone has achieved that moment when you start to eat it, and the humans gag just looking at it.  This is when the fun starts.  The humans will try to grab the bone from you at this point.  A couple of growls will make your humans rethink that plan.  This is when they try to get the bone from you with the "grabby arm".  Feel free to bite it because you can't hurt it.  It is metal and plastic so it feels no pain!  This is the point where the humans are willing to negotiate.  I got a bag of bite size dingo bones in exchange for the "yucky" rawhide bone.   I think the humans threw my marinated bone in the trash..I'm sure I can get myself another bag of dingo bones or maybe some other delicious treat. To be honest, I would love to eat my yucky rawhide.  Believe me:  it smells so good.  If only I could find it. 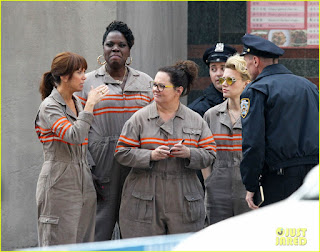 I'm sharing this photograph of The New Ghostbusters movie. I took one look at the photo, and said,  WHY?????    Why??????!!!!!  Of course, that is the mormal reaction humans have when they see this photo.  Why did Hollywood feel Ghostbusters needed to be remade?   I don't normally bet, but my money would be on those movie.doing badly.at the box office.  If they wanted a box office,  hit, an all dog cast would be the way to go.  Dogs have so much talent that the humans can't compete!

Herro readers. Itis always good to welcome you to my blog!  I didn't write yesterday because I was attacked by Angel.  Sometimes she gets very grouchy, and she attacks me.  I didn't get hurt, but only because the humans intervened.  They told her she was being a bad dog!  Occasion nally, the humans do get things right.  It may not happen often, but it does happen.

Speaking of Angel Zoom Smokey. She was surfing the Internet today, and she found a dog kennel chicken coop. She thinks it is the best idea humans have ever had.  She said a dog can walk to the chicken coop area; and grab a chicken for dinner
Add a pig sty, and a dog will have bacon to go with the eggs (pre-birds).  I've got to admit:  sometimes the humans do come up with some good ideas.

I am happy to report that Humom did not listen to my human brother when he said to start giving me kibble.  Humom realized that I was refusing to eat because of my hurt paw.  My paw is better, and I'm eating again.  I'm glad humom is one of the smarter humans.

Happy birthday United States.  I wonder what I will get for its birthday.  As my regular readers already know, I get gifts every time someone has a birthday around here.  Since it is the whole country's birhday, I bet it will be something huge!

Since I have been taking care of humom, I now answer to the title, Dr. Demon.  Angel is Nurse Angel Fuzzy Butt.  Because of my new status, I have told the humans to get me a stethoscope to wear aroind my neck so I can look the part.  I wonder.............. can you get a stethoscope made of rawhide?   I'm sure a doctor would prefer one made from rawhide.  All the dogs I asked said they would order one made from rawhide

Things are not going well around here!  Thank dog I have an outlet for my misfortunes.  I know that many dogs who read this will understand my plight.  It started at dinnertime last night.  William (my server) fed me ham-or tried to feed me ham.  I refused to eat it so he he allowed me to go without dinner.  I was a nice dog, and I love my humans so I did not call the authorities and report them for dog neglect.  Today I confiscated a bag of bacon and cheese flavor Beggin' Strips because I was hungry; and, obviously, the humans wanted me to get my own food.  I didn't eat them immediately because I carried it with me everywhere.  I used the bag as a pillow when I napped.  It is wonderful to. smell bacon in your sleep!

Today, at feeding time, William again offered me ham.  I politely showed him my bag of Beggin' Strips and refused to eat the ham.  He felt that barking at him was not polite behavior.  How am I supposed to let them know that the ham is not up to my standards?  I know the store has  maple syrup ham which is much more delicious, but my humans don't want to spend $10.00 a pound for it.  I'm tired of the humans and their cheapskate behavior.  It is okay when they are cheap with their own food, but they shouldn't be chrap with mine.  I happen to have very refined taste buds.  There are many foods I will not try:  hot dogs, pepperoni, liver, eggs-to name a few.  I also have refused to eat salmon and sreak when I'm not hungry.

However, this time William took offense to my refusals to eat, and told Mommy I'm spoiled and should be fed kibble.  I was insulted!  Kibble is for dogs, and I'm refusing human food.  How logical is that thinking?    I know the humans are stupid, but have they lost all common sense?  I'm not spoiled!  If I were spoiled, I would smell rotten.  I happen to smell great-particularly after I put on some cologne.  I hope Mommy has more sense.  She is much smarter than my brother.  She thinks like a dog!