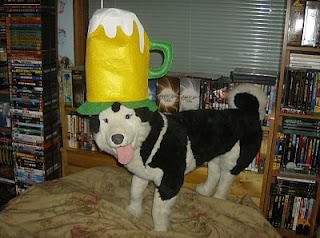 Happy St. Patrick's Day!  My stunt dog, Phantom Fast Snowman is dressed for the day. My humans have him do all the stuff that is dangerous to them.  I have made it clear that .tbat anyone who tries to put clothing on me might not keep 5 fingers on both paws.

It is time I write a movie review, and the movie that receives this honor today is Black Mass starring Johnny Depp.  This movie is based on the life of Whitey Bulgar, a Boston criminal turned FBI informant.  This movie is one of those suspenseful ones.  I must warn my readers that I am about to issue a spoiler alert.  Angel Zoom Smokey and millions of women in the audience were upset about Johnny Depp'S baldness.  The movie fails to answer thAt important question.  However, there is an extra clip on .the blu ray showing Depp getting madeup for the part.  His hair was covered with a bald cap which was covered with some hair on the sides.  With that in mind , women can  relax.  Johnny's hair is safe.